In October, I had the opportunity to participate in one of the most incredible experiences of my life. Each year, a charity organization known as “Soles for Souls”, descends upon Cabo San Jose Mexico and provides shoes for the locals. Many shoes.  Thousands and thousands of shoes for men, women and children.  This year, I was invited to join this amazing group of volunteers. And while I am confident that our efforts made a small but valuable impact on the lives of many, I am certain that the impact on me was much greater.

As a bit a background, I speak exactly two words of Spanish. “Cerveza” and “bano” (a word that became more important to learn the more familiar I became with word “cerveza”). The severe limitations on my familiarity with the native language was less of a red-flag for me than was my even greater ignorance of shoe fashion. Especially women’s shoes.  I understand gym shoes and hiking boots and uncomfortable black or brown shoes that you have to wear to court.  I also have a working knowledge of flip flops. That’s it.  So the idea that I was going to be involved in the distribution of thousands of pairs of shoes, many to women, was a concept that was much more foreign to me than was the language.

The event was scheduled to begin at 8:00 a.m. at a small (very small) open-air auditorium. At 5:30 a.m., the line of locals waiting to receive shoes was over 1 ¼ miles long. This was 2 ½ hours before we were to begin giving away the shoes.  Waiting in the lines were families that had come together especially for this event, wearing their Sunday best and enduring stifling heat and humidity.  There were also folks that had just gotten off of work, folks that were on their way to work, and many folks whose great or minimal age precluded them from working.  All were there, though.  Waiting in line to receive a pair of shoes.

And receive shoes they did.  I cannot describe the frenzied pace of trying to get people properly sized, seated and fit with shoes that were comfortable for them and get them out the door so the next person could step up. It was (generally) organized chaos. And it was amazing!

I helped a woman find shoes that had never worn closed toe shoes before- flip-flop style sandals were they only type of shoes she had ever had.  When she came to be fitted she was barefoot, having stood in line for hours waiting for this opportunity. Tears rolled down her cheeks as we ushered her out after finding a shoe that fit her just right. I will never forget her. 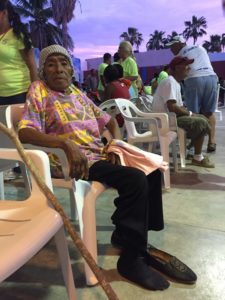 I will also never forget the kids.  There were so many kids! More kids than we had ever had before, which was a blessing and a curse.  Since the shoes that we were giving away were shipped to our location in advance, we did not have an infinite supply of shoes in general or specific styles or sizes. And while I took tremendous joy in giving the kids shoes and watching their faces light up, I knew that the pace in which the shoes were leaving was not sustainable. And, at once, we had no more kids’ shoes. Some sizes had been running low or out at different times but now, the kids’ shoes were all gone.  Yet there were still many kids left in line. Kids that had waited for hours in the heat with nearly the excitement of Christmas, only to be told that Santa ran out of gifts. Tears rolled down their faces as they were ushered out.  I will never forget them. 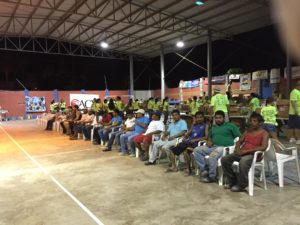 In a span of six hours, we sized and distributed more than 10,000 pairs of shoes. It was amazing to me to see the dedication of those that organized this event and their commitment to making it even better next year. In the hustle and bustle of everyday life, I think we sometimes lose perspective on how much we have and how much capacity we have to give. And while I am no nearer to fluent Spanish than I was before I went, I can promise you that no cerveza has ever tasted better than the one I had at the end of that day.